What kind of society are we passing on to our children? What are the core values which determine the British way of life? A nationwide debate is emerging. 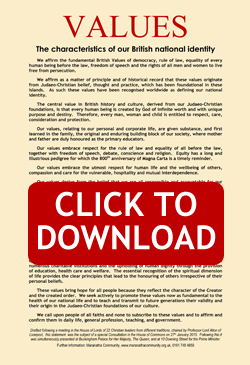 Today (27th January 2015) a statement was presented at a meeting in the House of Commons chaired by Professor Lord Alton of Liverpool and convened by Fiona Bruce MP. It will be given to hundreds of people in leadership positions throughout the country. Immediately following the meeting it was presented at 10 Downing Street for the Prime Minister, Rt. Hon. David Cameron and simultaneously at Buckingham Palace for Her Majesty the Queen.

The statement boldly affirms, as a matter of historical record, that our values originate from Judaeo-Christian belief, thought and practice. It claims that these values have been recognised worldwide as defining our national identity. There is a widespread concern that these values are endangered.

A copy of the statement is available here.

For further information, questions and interviews contact the Maranatha office – 0161 748 4858 (during office hours).

Background Notes
The Maranatha Community launched the report ‘A Matter of Life or Death – The Struggle for the Soul of Our Nation’ in the House of Commons of 13th January 2015. It sounded the alarm about the decline of our nation. It called for the reaffirmation of Christian values and a broader recognition of the paramount importance of the spiritual dimension of life.

Last year Maranatha published a hundred-page report – ‘Global Persecution – The Price of Faith for Christians Worldwide’ which was presented to the President of the United Nations Human Rights Council in Geneva and was supported by the Prime Minister, the Deputy Prime Minister and Mr. Miliband. This will be the subject of a special presentation in the European Parliament later this year.

Two years ago, Maranatha published the challenging report ‘The Big Question – What on Earth are We doing to Our Children?’ following a similar document 17 years previously, which aimed to drive children to the top of the political agenda. Maranatha is currently preparing a major policy document on ‘child abuse’.